When you have dirty carpet or flooring in need of professional services call us and we will send one of our professional Newhall carpet cleaner staff to attend to your needs. Newhall California is covered by our cleaning professionals where we make people’s lives more pleasant and healthy by keeping their flooring clean. There is no need to live with unsightly carpets and rugs when we are just a phone call away to schedule an easy service appointment.

​Southern California living and the residents deserve the treat and joy of living on floors that are healthy and stain free. With the abundance of great weather and sunshine no doubt people are spending more time outside and then tracking that inside on their clean floors. When the spring rain comes and creates mud don’t let that much get tracked into your carpets and stay there. Just contact our office staff to make an appointment so that we can get your flooring as clean as you can imagine.

With all that there is to enjoy in Newhall feel free to visit one of the many fine establishments while we take care of the dirty floors in your home or business. Whether you find a place along Lyons Avenue or perhaps near the mall rest assured that the flooring will be done to your satisfaction when you return.
​

​Newhall California facts and figures - things you may not have known.

​Newhall was named after a gentleman businessman, Henry Newhall.  Newhall is the oldest of the cities incorporated in Santa Clarita. It is also home to the William S Hart County Park. Tours can be had at this park which is famous for its silent movie maker and the mansion that was lived in. The train station resides nearby and this is a great place to spend an afternoon.

With the Mediterranean type climate that Newhall enjoys, Southern Californians living here have an abundance of great days to spend outdoors. Being part of Santa Clarita, Newhall has access to the wonderful Paseos for cyclist to enjoy. Newhall is nestled on the southern edge of Santa Clarita with some wonderful hills and beautiful older properties.

Oil plays a history in Newhall California. The Pioneer Oil Refinery resides here and is actually classified as California Historical Landmark Number 72. This is the oldest oil refinery in the world and is actually the beginning of successful commercial oil refining in California.

Not only is Newhall famous for its roots in oil but being near Los Angeles it is also famous for some movies. In 1973 the Disney movie “The World’s Greatest Athlete” was partially filmed in Newhall. Prior to that in 1954 the movie “Suddenly” was filmed there. 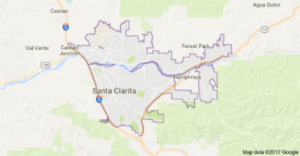